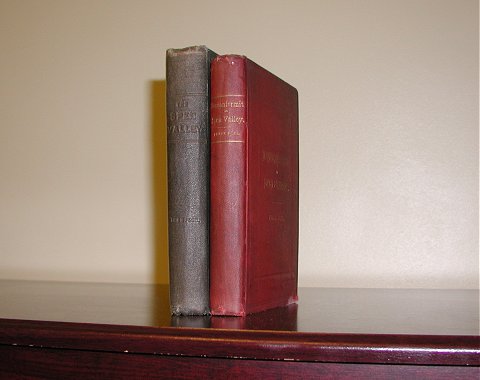 The books on this CDrom will be of interest to anyone researching their ancestors in the Heckmondwike, Cleckheaton and Liversedge area of Yorkshire. The whole of both of the books are machine searchable.

In order to give you a better idea of the information in the books the following items are available here on line:

There is no index to "Nonconformity in Spen Valley", and no list of Contents in "The Spen Valley", however these omissions are more than compensated for by the books on the CDrom being searchable.

The above Acrobat files were extracted from the CDrom and show the quality of the images. You will need at least version 5 of Acrobat to open this file. If you do not have an up to date version please go to the Adobe web-site to obtain a free version of Acrobat Reader.

The Puritans, the pioneers of civil and religious liberty -Hume's testimony-The Mother Church of Congregationalism in these parts-The Rev. Christopher Marshall, of Woodchurch and the Church at Topcliffe-Farnley Wood plot The Topcliffe burial ground-Its desecration-Appeal to Nonconformists.

Scanty records of the early Nonconformist churches-Difficulties of the early ministers to find safe places in which to hold meetings-No Nonconformist meeting house in Heckmondwike in 1670-The barn at Chapel Fold-John Peebles, " the devil of Dewsbury," a great persecutor -Oliver Heywood's first recorded visit to Heckmondwike-Abraham Nayler 's house the first meeting place-Rev Josiah Holdsworth settles in Heckmondwike-King Charles's Declaration of Indulgence

The Rev. David Noble chosen pastor of the Heckmondwike church - His imprison- ment in York Castle - Recognition of the new pastor - The "chapel at Chapel Fold " a myth - Troublous times - Nonconformists refuse the bribe of liberty of worship, to help the king to rule without Parliament - Flight of the king - Toleration - Return of the Heckmondwike Nonconformists to their old preach- ing room - Proposed union of Presbyterians and Independents - Peace at " Ye Closes "--Rev. D. Noble on prophecy - Death of Oliver Heywood - Building of a chapel in Chapel Lane - Death of the Rev. D. Noble.

The Rev, John Kirkby appointed pastor of the Heckmondwike church - The Arlan heresy and the Presbyterians - Religious persecution rampant still - The Mansion House built out of scandalous fines on Nonconformists - Death of the Rev. John Holdsworth, of '' Ye Closes " - Repairing the Heckmondwike meeting house --Death of the Rev. Richard Thorp, of Mirfield - Building of Hopton chapel - Progress of the church at Heckmondwike under Mr. Kirkby - The Priestleys and the Keighleys - A scattered congregation - The Holy Club - The Rev. Mr. Ingham in Spen Valley - Field preaching - Opposition of the Rev. John Kirkby.

John Nelson and Methodism in Spen Valley - Calvinism and Arminianism confront each other - Slow progress of Methodism in Heckmondwike and Cleckheaton - Methodist preaching rooms in Spen Valley - Rapid Progress of Methodism in Birstall - Increase of Mr. Kirkby s congregation - A " loft " put into the chapel - Low wages and cheap provisions - Rev. John Kirkby's health fails - Rise of the "gifted brethren " - The Rev. John Whitford, the first Independent minister at Cleckheaton.

The Rev. John Kirkby's last illness--The services conducted by the "gifted brethren " The Rev. Alvery Jackson visits Heckmondwike and mentions the Nev. James Scott as being a likely minister to succeed Mr Kirkby - Deputation sent to visit Mr. Scott - The Rev. J. Scott's first visit to Heckmondwike - Is invited to be- come pastor and declines after some consideration - The church persist in their invitation - Mr. Scott objects on account of the "gifted brethren," whose pro- ceedings he dislikes - Rev. John Pye uses his influence - Mr. Thomas Armitage, "a gifted brother," writes strongly urging Mr. Scott to accept the invitation and pomising his co-operation - Mr. Scott accepts the call - Death of the Hey. John Kirkby.

The Rev. James Scott pastor of the Heckmondwike Church - Biographical sketch - Pastor of Stanton, Horton. and Tockholes - Low state of religion in the Churches - The "gifted brethren" introduce dissensions into the church at Heck. mondwike - The Sandemanian heresy - A pharisaical sect.

Deacon Joseph Priestley and his relations - Visit of the Rev. Edward Hitchen to Fieldhead - Extracts from an old diary - A perilous journey - Conference on the low state of spirituality in the churches - Spread of Socinianism - The establish- ment of an Academy for the training of orthodox Ministers first suggested - Rev. James Scott undertakes the superintendence - The first Academy opened at Millbridge.

Mr. Timothy Priestley's eccentricities-Mrs Scott's health fails-Mr. Waldegrave and Mr. Priestley accepts calls-'The academy bears good fruit and proves itself a bulwark of orthodoxy-Death of Mrs Scott-Mr. George Lambert and Mr. Toothill admitted students-Peeping into futurity-Great popularity of the students-Purchase of Southfield and removal of the college to that place-List of students-College removed to Heckmondwike Market-place-Rev. James Dawson, of Cleckheaton.

The New Circuit-List of the ministers who have laboured in it-Brief notices of some of the most prominent -The " Penny Preacher "- Illness of Mr, Bramwell at Gomersal-The dreadful accident at Heckmondwike Wesleyan Chapel-Erection of Wesleyan Chapels at Hightown and Gomersal-Squire Brooke's efforts--Building of a Wesleyan School at Gomersal, and a school-chapel at Little Gomersal-Samuel Senior, Richard Starkey, and Joel Allott-The Methodist New Connexion, at Heckmondwike-Rise of Primitive Methodism in Spen Valley.

The vacancy in the pulpit of the Upper Chapel-Mr Henry Bean receives a call and accepts the invitation-The Dex Family--Mr. Bean's early life-A period of great prosperity-The old chapel becomes too small--Miss Parsons exhorts the people to arise and build-Erection of a new chapel and schools-Mr. Bean a " born preacher," and model pastor - Death of the Rev. Henry Bean. -Regret of the West Riding Churches.

The universal respect in which Mr. Bean was held shown in a marked manner-A day of general mourning -The funeral procession-Eloquent address in the Chapel by the Rev. Robert Bowman-The interment.

Changes during Mr. Bean's ministry in the town and the neighbouring churches- The Rev. Robert Martin becomes the pastor of the Lower Independent Chapel -Sketch of Mr Martins early life-Educated a churchman, he becomes a Congregationalist, and enters the ministry-Opens his ministry at Ripon and afterwards removes to Heckmondwike-A long season of prosperity followed by a time of trouble and perplexity, ending in Mr. Martin's death under very painful circumstances

The Rev Charles Atmore at Heckmondwike-The Rev. John Brown's text- Erection of the Centenary Chapel at Roberttown.-Uneasy Feeling amongst the Methodist Societies-The Littletown Methodists-'They decide to build a school -The expulsion of Everett, Dunn and Griffith strongly condemned in Spen Valley-The Heckmondwike Reformers worship in the Town's School- Building of the Reform Chapel-They Join the Methodist Free Churches- Erection of a new place of worship-The Littletown Reformers meet at Lawford's factory-They buy back their old chapel.

The Rev. M Howard chosen pastor of Westgate Chapel, Heckmondwike-New life in the Church-The old chapel pulled down and a new one erected on the site-Trouble with one of the deacons-Celebration of the 21st year of Mr. Howard's pastorate-Mr. Howard resigns on his 62nd birthday - His death- The great respect in which he was held-His successor, the Rev. C. E. Darwent. M A.