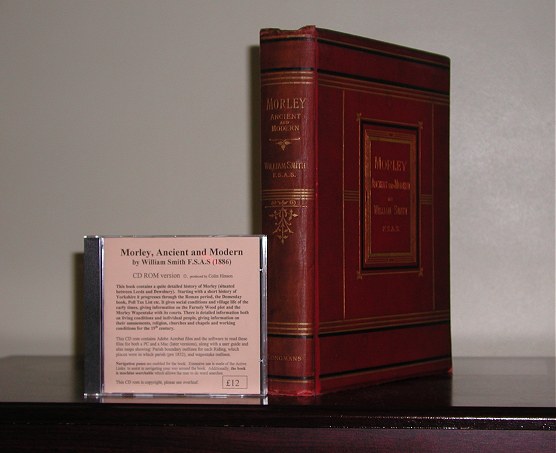 Morley Ancient and Modern, contains a quite detailed history of Morley (situated between Leeds and Dewsbury). Starting with a short history of Yorkshire it progresses through the Roman period, the Domesday book, Poll Tax List etc. It gives social conditions and village life of the early times, giving information on the Farnely Wood plot and the Morley Wapentake with its courts. There is detailed information both on living conditions and individual people, giving information on their amusements, religion, churches and chapels and working conditions for the 19th century.

In order to give you a better idea of the information in the book the following items are available on line:

I asked Don Asquith (who I knew had an interest in Morley) if he would be kind enough to do a review of the book on this CDrom for me (as opposed to a review of the CDrom). The following is what he came up with, which I hope you find helpful:

A review of the book on this CDrom:

William Smith was the second of the two local historians of Morley in the 19th Century, and "Morley, Ancient and Modern" was the last of his three histories of the early days of the town. As such, his work builds on the earlier insights of Norrison Scatchard, and carries the documentation of the evolution of the village to it's emergence as the Borough of Morley in 1886.

If Morley has a special place in the history of West Yorkshire, it is it's early involvement in the growth of non-conformism during the period following the Restoration. And, if there was a defining event in that involvement, it was the "insurrection" -- the Farnley Wood Plot of 1663. While the uprising itself was a total fiasco, the authorities of that time used it as a means of making their point. Twenty-two were executed, primarily at York but also at Leeds, and many more were jailed for various periods of time. On a personal note, one of those executed, and four of those jailed and later released, were Asquiths. Understanding the traumas of the events, and that they were staunch non-conformists, has helped in unraveling the genealogical histories of the subsequent families. Smith's is not the only interpretation of the events of that night in October of 1663, and of the repercussions that followed. However, if you have non-conformists among your ancestors, or if you simply want to know more about the early years of Congregationalism in Yorkshire, it is a good place to start.

Otherwise, the majority of Smith's book is devoted to typical life in Morley, and events on which I am not qualified to comment. However, in the final third of his book, Smith returns to the history of the non-conformist churches of Morley, recapitulating in detail the history of the Old Chapel, the churches before it on the site, and St. Mary-in-the-Wood that followed in 1878. He also provides substantial discussion of the New Chapel Independent, and of Rehoboth Chapel that replaced it in 1835.

If you are researching your ancestors in Morley, this book will provide you with a range of background information, and more importantly, probably help you to understand the relationships between the several non-conformist churches that may have recorded the births and burials of your ancestors. Or, if you just have a general interest in the early years of Congregationalism in Yorkshire, you should find the history of the people of Morley and their churches of great interest.