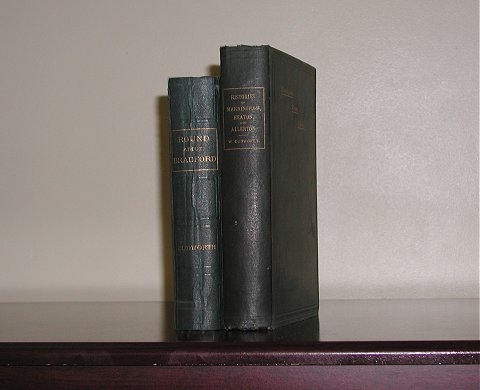 The books on this CDrom will be of interest to anyone researching their ancestors in the Bradford area of Yorkshire.

There is no index in this book, though the above list of places is given as an "index" in the book, it is simply a list of contents.

In order to give you some idea as to the contents of the book, the following are available on line in Acrobat format. If you do not have Acrobat Reader, it can be downloaded free from the Adobe web-site.

"Histories of Manningham, Allerton and Heaton":

Contains over 350 pages along with some 20 line drawings (some full page) and 17 full page photographs/paintings. The following are available here on-line to give you some idea as to the actual contents of the book:

If you do not have Acrobat Reader, it can be downloaded free from the Adobe web-site.

A review of the two books by Jess Wild:

"ROUND ABOUT BRADFORD" by William Cudworth:
The rather unimaginative title of this book gives little indication of the wealth of history, information and anecdotes to be found within its pages. Step back in time to 1876 as William Cudworth takes you with him on his travels around the towns, villages and hamlets in the Bradford area. Follow the route he takes on the fantastic old map at the end of the book as, with graphic detail, he describes the places and the people who live there.
Read about the commercial utopia of Saltaire - "a marvel of cleanliness, cheerfulness and beauty" - where the workers were provided with 3 bedroomed, stone-built houses and "a park of fourteen acres pleasantly sloping towards the River Aire, for their recreation and amusement." Then compare this to the hardship that the ironworkers of Low Moor had to endure, living under a permanent canopy of smoke in the "shanties" which sprang up around the foundry.
Smile as Cudworth, writing in his own entertaining style, recalls many humourous stories passed down from father to son, giving a wonderful insight into the past which is not found in many history books. Find out how Mrs North dealt with the parson who 'stole' a plant from her garden or the reason why 'Wise Willie' ordered a watch to be buried!
This delightful book brings 'everyday' history to life and we should be grateful that William Cudworth recorded it in such detail, for without him it would surely have been lost for ever.

"HISTORIES OF MANNINGHAM, ALLERTON and HEATON" by W. Cudworth:
Another 'good read' from the pen of William Cudworth, and a more complete history and in depth study of this area would be hard to find. When the book was written Manningham, Allerton and Heaton were separate villages, each with a long and chequered history, which the author has recorded in great detail.
The book is littered with the names and histories of the ancient families who helped to shape these villages - Illingworth, Lister, Horsfall, Cockcroft, Robertshaw, Jowett, to name but a few. Anyone who has ancestors connected to this area will surely find a mention of them somewhere within these pages or even a picture of where they lived, as there are many illustrations of people and places throughout the book.
Finally, as with Cudworths "Round about Bradford", I will guarantee that you can't help but smile when reading the numerous 'quirky' tales he has collected from the inhabitants of this area.

CHAPTER VIII. : Girlington As It Was and Is, Bradford Freehold Land Society, The Girlington Estate, The Hornblow Lands, The Northrop Family, Common Fields of Manningham, Disposal of the Northrop Lands, Map of Girlington, Coal Mining

CHAPTER I. : Heaton As It Was, Its Pleasing Conformation, Roads and Approaches, Landed Proprietors, Streams and Reservoirs, Mineral Resources, Agriculture, Recent Improvements, Population and Rateable Value

CHAPTER II. : Ancient Ownership, Poll tax of Richard II., Richard Tempest and Queen Eizabeth, Decree of 1580, Freeholders of the Period, Sale of the Manor, Curious Handbill of 1788, The Ferrands as Lords of the Manor, The Courts Baron, Perambulation of the Boundaries, Enclosure of Allerton Common

CHAPTER III. : Hearth, tax Returns for 1666, Allerton Freeholders in 1734, Formation of the Local Board, Annexation to Bradford