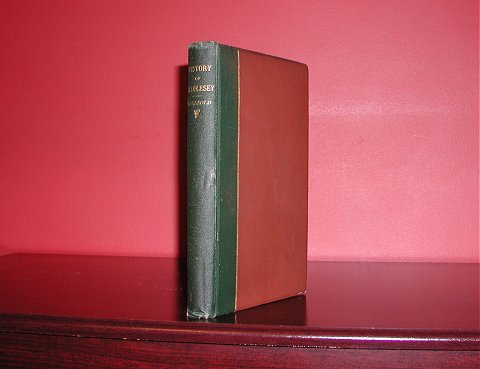 "The History of Haddlesey"
by The Rev. J.N. Worsfold

"The History of Haddlesey" was written by The Rev. J.N. Worsfold, Rector of Haddlesey, and published in 1894. The book contains about 250 pages, with 18 illustrations. In order to give you some idea as to the contents of the book the following items from the book are available here on-line:

CHAPTER III.
ORIGIN OF THE KNIGHT TEMPLARS.
Emperor Constantine and Empress Helena—Pilgrimages to Palestine—Relics—Peter of Amiens—Council of Clermont —Walter the Penniless—The crusading army and its operations

CHAPTER III.
ORIGIN OF THE KNIGHT TEMPLARS.
Emperor Constantine and Empress Helena—Pilgrimages to Palestine—Relics—Peter of Amiens—Council of Clermont —Walter the Penniless—The crusading army and its operations 24-35

CHAPTER V.
THE KNIGHT TEMPLARS : THEIR GROWTH AND DECAY.
Site of the preceptory—Inventories of property and goods, etc., belonging to the Order in this neighbourhood

CHAPTER VI.
THE KINGDOM OF GOD AND HOUSE OF PRAYER AT HADDLESEY.
Its founder and benefactors—Lists of first clergy and patrons, etc

CHAPTER VII.
THE STAPLETON DYNASTY, WHICH EXTENDED FROM I262 TO THE DEATH OF THOMAS STAPLETON, ABOUT 1380.
The first Baron Stapleton—Battle of Bannockburn, and its effects

CHAPTER VIII.
EDWARD II. AT HADDLESEY.
Residence of Edward II. at Haddlesey—The King's table—An itinerary of his journeys, with illustrative map—National history of this date—Queen Isabella at Cawood—Siege of Berwick—The Despensers, father and son—Rebellion of Thomas, Duke of Lancaster—His own execution and that of other peers at Pontefract—Sandhall—Hatfield Hall, etc.

CHAPTER IX.
TEMPLE HIRST UNDER THE DARCYS.
Rise and progress of the family—Their services in war—Rate of wages in fourteenth century for artificers—Also rate of wages for agricultural labourers, and prices of farm produce
in the sixteenth century—Fishing records for same date

CHAPTER X.
SECOND BARON MILES STAPLETON.
The foundation of the Order of the Garter—The plague in England—Baron Stapleton, Sheriff of Yorkshire and Escheator for the King in Yorkshire—Holds an inquiry at Selby—Has David Bruce, King of Scotland, in his charge — Differences with his tenants at Carlton—Makes his will, and requests that he may be buried in Drax Church—Disputes about property after his death, and law suits in the Court of Chancery and at York—' Parson of Hathelsay' mentioned

CHAPTER XII.
TEMPLE HIRST AND THE DARCYS (continued).
A glance at doings in Parliament in the reign of Edward III.—One of Yorkshire's noblest sons appears in the arena as a patriot and theologian—Is supported by the Court and some of the nobility, including John of Gaunt and many of the clergy—Knights Hospitallers try to deprive Lord Philip Darcy of Temple Hirst—The Darcy tomb In Selby Abbey —Thomas Lord Darcy's connexion with Cardinal Wolsey— Dissolution of the monasteries

CHAPTER XIII.
THE PILGRIMAGE OF GRACE.
The Pilgrimage of Grace extends from Lincolnshire to Yorkshire
— The two provinces of York and Canterbury and the sentiments of their inhabitants—Robert Aske chosen to head ` The Pilgrimage' — Earl Percy refuses to join — Aske captures Pontefract and Lord Darcy of Temple Hirst—Henceforth Temple Hirst is the headquarters of the rebels —Duke of Norfolk out-manoeuvres Aske, though Darcy will not betray him—Why Darcy sympathized with Aske—Death on Tower Hill—Courts of law at Temple Hirst

CHAPTER XIV.
THE DARCYS AFTER THE PILGRIMAGE OF GRACE.
Lord George Darcy and his tomb in Brayton Church—Lord John Darcy, his public employments—' The Good Lord Darcy' and his four wives—Lady Isabel Darcy of Aston—Conyers, Lord Darcy, Earl of Holderness—Pedigree of the Darcys of Aston—Duke of Leeds

CHAPTER XV.
THE STAPLETONS OF CARLTON AND BARONS BEAUMONT.
Arms and Motto—Lady Elizabeth Stapleton—John Stapleton—Brian Stapleton and the wars in France—Carlton Chapel first mentioned—Sir William Gascoigne (son of the chief justice)—Battle of Towton—Creation of the barony of Beaumont—Sir Brian Stapleton at Flodden Field, etc.—Lady Mary Stapleton, who gives silver candlesticks to York Minster—The title of Lord Beaumont revived in the person of Miles Thomas Stapleton of Carlton—Later peers and members of this family

CHAPTER XVII.
HADDLESEY CHURCH : ITS CLERGY AND ENDOWMENTS
Sir Oliver Cromwell and James I.—Confiscation of Church property—Two priests' lands—National and ecclesiastical changes— Cromwell's letter to constables and head borough of West Haddlesey— Parliamentary surveys affecting Birkin and Haddlesey—Earl of Rosebery—Haddlesey separated from Birkin and re-endowed—Rev. Thomas Pickard, clerk, becomes Rector of Haddlesey under the new scheme—The upset at the Restoration of Charles II. as regards both Haddlesey and Birkin

CHAPTER XVIII.
THE HOUSE OF ANCASTER.
The house of Ancaster connected with Haddlesey in the seventeenth century—Death of Earl Lindsay—The Dukes of Ancaster—Duke and Duchess of Suffolk—Craft and cruelty of Bishop Gardiner—Richard Bertie escapes his reach by flight to Holland

CHAPTER XXI.
FROM DARKNESS TO LIGHT.
Parish history from Chapter XVIII. resumed—Rectors of Birkin from the restoration of Charles II.—The Thornton family --The Rev. Thomas Wright refuses a bishopric—Archdeacon Hill as patron— Rector Alderson—The Rev. Valentine Green at Haddlesey--Rev. S. C. Baker as curate —A new bell, with a new and enlarged church—Three Wesleyan chapels—New order in Council comes into force at the death of the Rev. Valentine Green