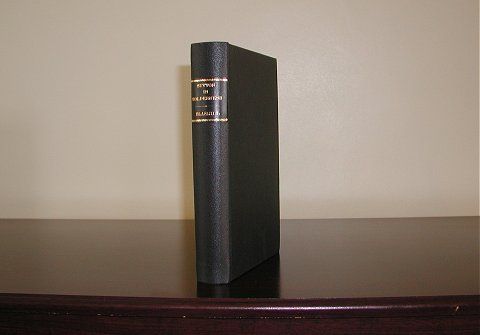 Sutton in Holderness (Sutton on Hull)
by Thomas Blashill F.R.I.B.A.

The book on this CDrom will be of interest to anyone researching their ancestors in Sutton in Holderness (Sutton on Hull) area of Yorkshire. The book is machine searchable.

This book was published in 1896 and contains over 320 pages, including about 30 illustrations. It is a comprehensive history of Sutton in Holderness (or Sutton on Hull) up to the late 19th century.

In order to give you some idea as to the contents of the book, the following are available here on line:

CONTENTS:
THE ISLE of HOLDERNESS

Flight of Drogo - Holderness said to be barren - Embankment and Drainage - Marrs, sikes, and drains - New meadows and pastures - An Oxgang, with its appurtenances - The Lords of the Manor - The Berewic and its owners

THE EARLY LORDS OF THE MANOR

SAYER THE SECOND - THE KING'S BAILIFF

The forfeiture of his control over the river - Drainage of the marshes - Dripole in Sutton - The monks and the West Carr--Drainage of the West Carr - Mills, canals and fishery - The legacy of young Amandus - Death of a Bondman-- Sale of bondmen - Large grants to the Monks

Grants to Martin de Otringham - A rebellion in Holderness - Grants to the Nuns of Swine - Roads, or rights of way in the parish - New arrangements in the West Carr - The monks acquire pasturage in the Salts, and are turned out - Isabella de Fortibus acquires some of Sayer's meadows - Death of

A Hildyard Heiress - Thomas Sampson, Rector - Renewed disputes over the West Carr - Dispute over an old tunic - Knighthood of the Black Prince - The College of St. James founded, and Sutton Church built - Its dedication - The Black Death - Thomas Sampson's will - Death of Sir John de Sutton - His son no more heard of - The tomb in the Church - His wife's dower *

Decision of the dispute - Annual Dedication Festivals - The Players of Sutton - Eminence of William, Lord Hastings - His execution

Increased freedom of the tenants and cottagers - Sub division of the Manor - Purchase of a portion by Cardinal Wolsey - Salvain's share acquired by the Corporation of Hull - The Reformation - Dissolution of the Abbey of Meaux, the Priory of Swine, the Carthusian Priory of Hull, and the College of St. James - Disposal of their lands

New landowners and tenants - The estates of the Constables - The Dudleys - The Alfords and the Abbey lands - Edward Truslove of the Rectory-house - Thomas Dalton acquires the Hastings manor and parts of the Manor of Sutton--The Daltons of Nuttles - Their estates go to the Withams - The last of Magnusdaile - John Truslove, the Watsons and Brom- flete - Burials in the Church

The scattered lands of each farm - Their grouping in the Fields - Their shape - The Balks - Oxgangs and their appurtenances - Management of the tillage and pasturage - Names of places and of lands - Details of farms - Corporation Farms - Land-Commons and House-Commons - Great mouths - Lands of Cocke, Munby, Chamberlaine, and Samuel Dalton - Periodical change of ownership

The reign of George 11. - Chamberlaine's Charity - Watson's Charity - The Masons and Pooles - The tithes and the lands of the College of St. James - Dis- putes among grantees of Church lands - The poet Mason - Mr. Thomas Broadley's acquisition of lands - Sale of the property of the Withams' - General appearance of the parish - The village farms - Sutton Mill - The roads - Costumes of the residents - Their manner of life and of death - The Fishery Feast - The parish flooded once more - Old Sutton drain cut - The Rev. Arthur Robinson - The Church services - Value of the benefice - The religion of the people - The last harvest from the common fields

ENCLOSURE OF THE COMMON FIELDS

Need for the enclosure - Mr. Charles Poole's interest in it - The enclosed lands made tithe free - Highways and private ways - Old Sutton drain cut - Possession of new allotments taken - Fencing in and the provision of new farmsteads - A lost allotment - Increased value of the land by enclosure and by drainage - Effect on the farmers and on the labourers

ANTIQUITIES OF MODERN SUTTON, PART I.

Consolidation of the shares in the Manor - Courts Leet and Courts Baron of Mr. Broadley - The Hastings Manor - The Rectory estate - Mrs. Watson's College - The White House ini 1820 - Improvements in cattle and in farming arrangements - Work of the farm - Spinning - Quietude of Stone- ferry--New families and new houses - Sutton Mill - Condition of the people as to health and security - The Press Gang - Robberies - Murder of John Taylor--The Parish Stocks - Superstition - The last witch