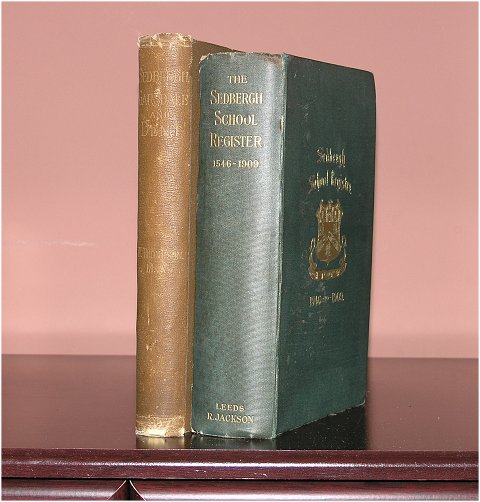 Navigation of the book on the CD rom is enhanced by the use of "Active Links" in the contents pages.

"Sedbergh, Garsdale & Dent" deals with the general History, the Church and Grammar school, social and domestic life and the scenery surrounding these three places in the Yorkshire dales.

"Sedbergh school register" contains the names of over 3600 boys who entered the school between 1546 and 1909. In most cases there is also a short biography for them with the later entries giving the current addresses (for 1909 of course). Additionally there are lists of Headmasters, Assistant Masters, Cricket Elevens, Football Fifteens, Athletic results, those who served in the Boer War, etc. etc.

In order to give you an idea of the information in the book the following items are available here on line:

The above Acrobat files were extracted from the CDrom and shows the quality of the images. You will need at least version 5 of Acrobat to open this file. If you do not have an up to date version please go to the Adobe web-site to obtain a free version of Acrobat Reader.

(i.) To the Norman Conquest. The Area Defined.
The CELTS. - The Brigantes - A Demolished Barrow.
The ROMANS. - Agricola in the North - The Tenth Iter - Over Burrow and Low Borrow Bridge Camps, and Traces of the Course between - Probable Cross-roads - A Supposed Camp : Recent Excavations.
The SAXONS. - Withdrawal of the Romans - The Saxons arrive - Strathclyde - Deira--Pope Gregory and the Mission of Augustine - Evangelisation of the North - Saxon Settlements Indicated by Existing Names - A Saxon Burh' Exemplified in Castlehaw Tower - Etymology of Sedbergh.
The NORTHMEN. - Danes and Norwegians - " Wapentakes" - Ewecross- The Danish and Norwegian Elements in Place-names - Finkle Street - The Saxon Earl, Tosti : his Deposition, Exile, and Death. (ii.) From the Conquest Onwards.
The NORMANs. - The Devastation of Yorkshire - The Domesday Survey, and the Inclusion of Sedbergh - Earl Tosti's Possessions - " King's Land" - The De Mowbrays - The Descent of the Manor - Subinfeudation- Braithwaite Otway and the Enclosure of Bluecaster. The Church. - lts Probable Origin - Early Patrons : Andrew de Harcla, Geoffrey le Scrope, Coverham Abbey - The Pilgrimage of Grace - Adam Sedbar, Abbot - A Royal Rebuke--A Marian Martyr - James I. The Civil War. - Two Loyal Sedberghians : Sir John Otway and Dean Barwick - Glimpses of Garsdale and Dent : " Protestation" and Rejoicing. George Fox. - His Tenets and Appearance - Fox's Pulpit and Firbank Old Chapel - Brigflatts Meeting-house - William Dewsbury and the Market Cross - Retreat of the Highlanders in 1745 - Traditions at Sedbergh.

The Church. Ecclesiastical Re-arrangements - The old Archdeaconry of Richmond - Vicars before and since the Reformation - Giles Wiginton, a Puritan Innovator - Jonathan Rose : his Memoranda - Architectural Features of the Church - A Peep at Ritual in the days of Queen Mary - Discoveries and Alterations during Restoration - Rood Screen - Rood Guild - Church Light - Reminiscences - Bells - Registers - Communion Plate -- Monu- ments - The Blands - The Washingtons - Old Yew Trees. (h.) The Grammar School. Its Connection with the Church - Roger Lupton's Chantry School - Provided with Scholarships and Fellowships at St. John's College, Cambridge - The first ascertained Master, Henry Blomeyr - His Will - Robert Hebble- thwaite's Mastership - His Emoluments Threatened - Roger Ascham Appeals for Aid - The Chantry Dissolved - A Friend at Court - The School Refounded by Edward VI., and Robt. Hebblethwaite Reappointed - The Royal Charter - List of Masters - Good Gilbert Nelson - A Parlia- mentarian Contrast - Litigation, Delation, and Sequestration - Posthumus Wharton, by Appointment of the Governors - The School Rebuilt - Wynne Bateman, Vicar and Master - A Master's House Obtained - Distinguished Old Sedberghians - Recollections of the School under the Rev. J. H. Evans - The New Scheme - Progress and Present Condition - The " Hastings" and other Exhibitions.

In the Past. Sanctuary-men - An Unrepaired Bridge - Remoteness of Sedbergh - Coaching Days - Tokens - Book Club - A Prosecution Association - The Ducking- stool - A Wapentake Court - The Custom of Tithing - Indenture of Apprenticeship--Farming the Poor - Doles and other Charities - " Jack o' Dyers" and the Reading of the Riot Act - Government by Gun-Law- A Universal Genius - Recollections of some Obsolete Characters. (ii.) In the Present. Population - Manufactures - Agriculture - The Dalesmen : their Traits, Do- mestic Surroundings, Occupations, Funeral Customs, and Dialect.